This book is great!

At first glance, I totally misjudged this book. I thought Tin was going to be another re-telling of Oz, I was wrong. Instead, it is an inspiring story which tackles such topics as Empathy, Loss, Prejudice, Discrimination, Love and Friendship. And it does so in such a naturalistic way that you never feel as though you are being preached to, rather that you are on this journey with the main characters and are experiencing each of these through their eyes, through their thoughts and through their feelings and emotions. 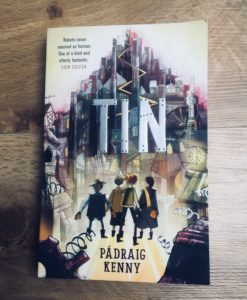 Orphan Christopher works for Mr Absalom, an engineer of mechanical children. he’s happy being the only ‘real’ boy among his scrap-metal buddies made from bits and bobs – until an accident reveals an awful truth.

What follows is a remarkable adventure as the friends set out to discover who and what they are and even what it means to be human.

Tin is Pådraig Kenny’s first book. Published by Chicken House it falls into the category of ‘young adult’. For all you adult readers out there, this should not put you off, in fact, I think it has helped Kenny that this book is classified in such a way. I feel that this could greatly increase his readership.

Tin has certainly opened my eyes to the variety and depth of the young adult market. Gone are the days when all YA books are about shiny vampires and werewolves.

The themes explored in Tin are quite deep. At first, I had images of reading this book to my nephew (he’s seven) but after getting a little further in, I realised, although he would love the characters and the vivid haphazard environments full of metal and mechanics, there were parts of the story which he would find upsetting.

I think that Tin would most definitely make a good film. With the right director, producer and film studio picking this up, I think Tin could most certainly become a film in the realms of Box Trolls or Coraline.

I can most definitely see Tin being turned into a film or TV series one day. For any of you who have watched films such as ‘box trolls’ or any Tim Burton animation, I would compare its visuality and it’s mismatched characters to them. If Tin does not get picked up by a film company soon, I will be incredibly surprised.

I found that more and more throughout the story, I sided squarely with the mechanical characters and believed the ‘human’ or ‘proper’ characters to be, if not evil, then severely wanting of certain emotions and empathy. More mechanical in nature than the mechanicals themselves. Kenny slips seamlessly between the narrative of children and mechanicals and that of the adult and ‘proper’ characters. Often highlighting the moral subtext and ethical issues through character interaction and description of behaviour rather than their speech.

After finishing Tin, I happened to re-watch Blade Runner. Now, I am not comparing the two as such, but if you enjoyed the ethical suggestions and moral issues which Blade Runner addresses, then this is a good book to read.

I finished this book in under a week, it is the first time I’ve managed to do that in a long time. I would say, that in part, this is because it was such a delight to read.

Tin is an incredibly visual book. Kenny paints such vivid pictures with his words that you are drawn into the environments and become not merely a bystander, but a real part of the action unfolding, you become a character, all be it a silent one, in the story.

The backdrop for Tin is similar, in set up, to a ‘steampunk‘ kind of reality. Except, instead of steam you have mechanicals who seem to be powered by the mechanisms within and a tiny drop of magic. Kenny does such a good job in writing this story that it becomes natural for the reader to suspend their disbelief. I was intrigued as to how the mechanicals operated in the way that they do, but once explained, it seemed to make so much sense that I didn’t really question it.

I do like fantasy and sci-fi novels, but sometimes, when an author chooses magic over science, I do find it slightly hard to swallow. In Tin though, the use of a magical element makes total sense and is not juxtaposed to the mechanics of the era at all. The culture and society, as well as the backdrop for the story, are rural in their heritage. The divergence in our timelines being centred in the World Wars is the perfect way to account for such great difference in our technological advances and history.

Who should read Tin?

I would totally recommend this book to anyone! If you are twelve, then this is a great book. It will offer up moral perspectives which you may not yet have come across in your lifetime as well as a story which will keep you entertained and wanting more every time you have to put the book down. For the avid young reader, this is the perfect book to add to your library. It should be stocked in all school and local libraries.

If you are an adult, then I would equally recommend this book to you. Sod the YA classification for this book. Harry Potter was a YA book and that didn’t stop millions of adults openly reading it. Tin is a great book which opens your eyes to different perspectives associated with the possibility of Technological Singularity and moves away from the classic Terminator-style future we are so used to seeing in most post-apocalyptic sci-fi novels and films.