This Is Going To Hurt – Secret Diaries of a Junior Doctor 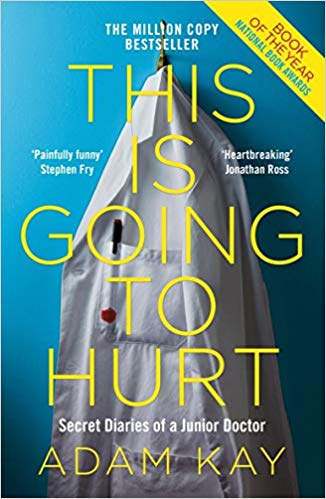 This Is Going To Hurt

Welcome to the life of a junior doctor: 97-hour weeks, life and death decisions, a constant tsunami of bodily fluids, and the hospital parking meter earns more than you.

Scribbled in secret after endless days, sleepless nights, and missed weekends, Adam Kay’s This is Going to Hurt provides a no-holds-barred account of his time on the NHS front line. Hilarious, horrifying, and heartbreaking, this diary is everything you wanted to know – and more than a few things you didn’t – about life on and off the hospital ward.

Why read This is Going to Hurt now?

This is going to hurt was recommended to me by a friend of mine who is not usually a reader. With two young kids and a full-time job, she never seems to find the time for casual reading, in fact, I can count on one hand the books that she says she has read in full. This is, however, a good indication for me of a good book. If she’s managed to take the time to read it, and not only that but read it in the space of one week, then it is definitely something I should be reading. She lent me this book straight after she managed to get through it in less than a week, but not just that, she loved it. And as a result, I bought her the Xmas version of this book for her Christmas present this year, and she finished that before Christmas Day even rolled around. “Twas the night shift before Christmas”.

I have seen this book doing the rounds for the past couple of years. It was originally published in 2017 by Picador and is described as a “collection of diary entries written by Kay during his medical training from 2004 – 2010.

Secret Diaries of a Junior Doctor – What is included in this book?

The book is written based on the diaries that Kay kept during his training and years working as a Junior doctor in the gynecology and maternity wards of the UK. He is very respectful of patients by using initials only and even states that there are some stories he has had to leave out due to the unmistakable nature of the patient. That being said, there are some stories in this book that I feel, if it were you, you’d know.

One of my favourites is the woman who decided to propose to her boyfriend on a leap year with a kinder egg centre insert – bear in mind that this is the gynecology department and I feel I need to say no more.

Although Kay is a comedy writer now, something which does come through in his writing. There are some very hard-hitting and emotional stories in this book, stories of when childbirth goes wrong or when gynecological issues cause major health issues and in some cases even death to the patient/patients. It is not a book for the faint-hearted, you need to go into it with your eyes open.
Ultimately, this book is the story of a junior doctor who spent the first ten years of his life, working his arse off, making huge life sacrifices and who eventually gave it all up because the emotional and psychological strain became too much, in a system where mental health and support is not on the radar, let alone openly talked about.

Kay does not hold back when it comes to speaking about the way in which NHS staff are treated, the sacrifices which they make in their personal lives and the terrible way in which their mental health is taken for granted. It really does make you appreciate all the hard work which they do, the hours which they put in and the pressure which they are put under and all for much less money than they deserve. I’d suggest that this book be read as a source material for anyone due to take on the job of Health Secretary in the government. I’d suggest it, but even if it was compulsory, I feel that the politician in the chair would simply get an intern to read it, summarise it and then never read that vital document before going in and cutting staff budgets once again.

Review of This is Going to Hurt

This Is Going To Hurt is a  great book, well written, both funny and heartbreaking in equal measure. Easy to read quickly as it is separated into sections that cover Kay’s many assignments. Within these sections, the book is laid out in chronological order, with each entry receiving its own section. This makes for such ease when picking up and putting down. The book is very much based on diary entries with some additional annotation explaining some of the more technical medical terms and an introduction at the beginning of each section explaining where Kay is in his career and what the impact of his work is having on his relationship and friendships.
There is also the overarching story of his friendships, relationship with long-suffering H and his late-night frequent phone calls and impromptu counseling sessions with the chronically depressed Simon. Things that kept me reading this book even though the rough stories, just to find out what happened to these people.

I read a lot of books which contain hardship, suffering and often death, but this one affected me more than I expected. In truth it is probably the knowledge that these people are real people, each baby Kay helped deliver is now a person, each death he witnessed affected friends and family of those people. He often says that it is the fact he ‘made a difference to people’s lives’ which keeps him going and you can really see this in his writing. People with a weaker disposition would not have made it through some of the things that he, not only witnessed but had to take part in. Troubleshooting the human body when it all goes horribly wrong and managing those life or death situations whilst managing a team, the expectations of the patient and the patient’s family, all whilst experiencing crippling imposter syndrome. Not many people could do it.

Adam Kay as an author

Sometimes Kay does come across as a bit arrogant, but you know what, I’ll let him have it. I have heard rumours that Kay is a bit chauvinistic during his live stage performances and that this can be a bit off-putting. During the reading of this book, all I got was the classic “god-complex” which I believe goes hand in hand with being trained in a field to the level that Kay was. Most doctors seem to have some form of seniority over their patients.

And to be honest, for most of the book, I just felt an overwhelming sense of shame that our NHS junior doctors are treated so badly and we take them all for granted. I can certainly see why he left the profession when he did.

During this time he was working all hours of the day and night for not much money, learning each and every day and not only bringing new people into the world but also saving people’s lives. If that doesn’t allow him a little arrogance then I don’t know what does. This also sets him up well for a career as a TV comedy writer.

What is Adam Kay doing now?

Adam Kay, upon leaving the NHS, was reborn as a writer for TV. Some may think that this was a strange choice, but upon reading This Is Going to Hurt, I can see why he chose this profession, he has a talent for succinctly telling stories with just the right amount of humour and with a careful balance of emotion. With credits on such programs as “Mrs. Brown’s Boys”, “Mitchell and Webb”, “Crims” and many more.

He hasn’t left the old life that far behind him. In 2020 Adam Kay was due to tour This Is Going to Hurt, reading excerpts from the book and answering the questions of his audience. [Rescheduled due to the Covid-19 crisis]

He is also working on adapting This Is Going to Hurt for TV, in a project with BB2. And in October this year (2020), he will be publishing a kid’s book called Kays Anatomy.

Do you ever think about your body and how it all works? Like really properly think about it? The human body is extraordinary and fascinating and, well… pretty weird. Yours is weird, mine is weird, your maths teacher’s is even weirder.

This book is going to tell you what’s actually going on in there, and answer the really important questions, like:

Are bogies safe to eat? Look, if your nose is going to all that effort of creating a snack, the least we can do is check out its nutritional value. (Yes, they’re safe. Chew away!)

How much of your life will you spend on the toilet? About a year – so bring a good book. (I recommend this one.)

So sit back, relax, put on some rubber gloves, and let a doctor take you on a poo (and puke) filled tour of your insides. Welcome to Kay’s Anatomy*.

*a fancy word for your body. See, you’re learning already. 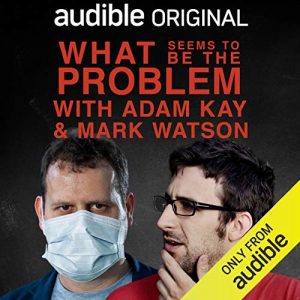 In conversation with his (very health-anxious) friend, the comedian Mark Watson, best-selling doctor-turned-writer Adam Kay takes a scalpel to the bizarre past, often-surprising present and fantastical future of medicine.

From Leonardo da Vinci’s extraordinary experiments, all the way to Adam’s own eye-watering experience on the wards, What Seems to Be the Problem…is riddled with wild historical tales, contemporary anecdotes, and jaw-dropping facts. A fascinating and funny trip through humanity’s often misguided attempts to make us better.

Would I recommend ‘This Is Going to Hurt’?

I would definitely recommend this book to anyone who loves real-life stories and anyone who loves a good emotional rollercoaster, but not to anyone who is currently pregnant or planning on being so soon. Some of these stories will stay with me for years to come and are likely to be forefront in my mind the next time a friend tells me their “wonderful news”.

More recently, Adam Kay has been involved in a project to edit together stories about the wonderful work done by the NHS. The past few months have really shown the UK what a wonderful and essential service the NHS is. This collection is designed to share some stories of how the NHS has been there for some of Britains most inspirational people and in some cases has saved their lives.

All profits from this book will go to NHS Charities Together to fund vital research and projects, and The Lullaby Trust which supports parents bereaved of babies and young children.

The NHS is our single greatest achievement as a country. No matter who you are, no matter what your health needs are, and no matter how much money you have, the NHS is there for you. In Dear NHS, 100 inspirational people come together to share their stories of how the national health service has been there for them, and changed their lives in the process. By turns deeply moving, hilarious, hopeful and impassioned, these stories together become a love letter to the NHS and the 1.4 million people who go above and beyond the call of duty every single day – selflessly, generously, putting others before themselves, never more so than now.

They are all heroes, and this book is our way of saying thank you.