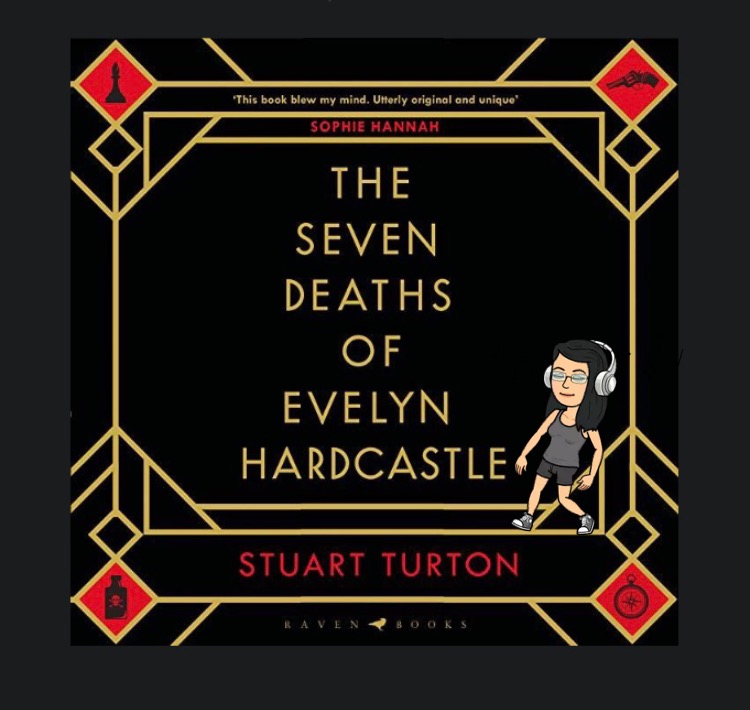 The Seven Deaths of Evenly Hardcastle

I’ve been seeing The Seven Deaths of Evelyn Hardcastle around for a while now and decided it was time to read it. Having been super busy with work, I knew I’d end up buying it and not reading it for months. Black Friday came around and Audible had a sale on some of the year’s bestsellers, a mere £2.50 per audiobook! Sold!

I downloaded it and spent just over a week listening to it on my way to and from work. Best £2.50 I’ve spent in ages. I would most certainly recommend this. 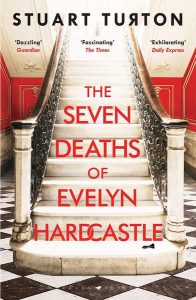 You can buy a signed copy of The Seven Deaths of Evelyn Hardcastle by Stuart Turton at Forbidden Planet.

The problem with an Audiobook

Audiobooks can be difficult though, I have a real fondness for a good audiobook read by a good narrator as you will know if you’ve been to my page on The Rivers of London Series. Unfortunately, the narrator can add or take away so much from the story that they can really make or break it.

Having listened to some audiobooks which I’ve given up on because of the narrator alone, I was pleased by the narrator on this one; Jot Davies has a versatile voice, smooth and with a lot of dexterity. Read in the first person the narrator is integral to the story working.

Since finishing the audiobook I have read some reviews; although overall they are good, there are a few people who do not like the narrator. This is a very personal thing I believe. I found Jot Davies to be a delightful narrator who added to the story for me. Sadly, not everyone felt the same way.

“It is meant to be a celebration, but it ends in tragedy. As fireworks explode overhead, Evelyn Hardcastle, the young and beautiful daughter of the house, is killed. but Evelyn will not die just once. Until Aiden – one of the guests summoned to Blackheath for the party – can solve her murder, the day will repeat itself over and over again. Every time ending with the fateful pistol shot.

The only way to break this cycle is to identify the killer. But each time the day begins again, Aiden wakes in the body of a different guest. And someone is determined to prevent him ever escaping Blackheath…”

The Seven Deaths of Evelyn Hardcastle is a thought-provoking and intriguing story. It is one of the first truly existential pieces of literature that I’ve ‘read’, and enjoyed, in quite some time.

I can’t help but imagine what Stuart Turton’s office must have looked like whilst he was writing this book. The story is not limited to seven different timelines, there are also several other characters whose timelines are relevant and integral to the story, and both the ‘reader’ and Aiden’s ability to solve the mystery of Evelyn Hardcastle’s murder.

For me, I was totally enthralled by this story,  I would happily have read/listened to this story all in one day, I was excited to get to the next host to find out the other perspectives of the timeline, to see if I could solve the murder before Aiden did.

Although there were some aspects of the mystery that I did solve, the main murderer was a total surprise. And my surprise was not limited just to the murder. This story contains many twists and turns relating to the identity of Aiden and his counterparts as well as the murder of Evelyn.

I found each of the characters to have depth and Stuart certainly explored many areas of the suspect’s lives, aspects which had a true impact on their place in this mystery.

I have seen this story compared to a cross between an Agatha Christie, Sherlock Holmes, Groundhog Day and Quantum Leap, all of which seem accurate to me. It is well written, contains twists and turns and I would certainly recommend this book in both audible and written form to anyone who likes a good mystery and a plot twist.

I do not know when or where this book is set.

It has been compared to the Great Gatsby and I agree. Blackheath is a stately home out in the countryside. There are no real indications of which time period this story is set though, the only technology which is mentioned is an ancient record player and a car which is a little temperamental. No other technology, but in a place like Blackheath, this doesn’t actually narrow it down at all. Often people aim to get away from themselves when they stay in a place like Blackheath. I’d narrow it down to somewhere between the 1920s and 1980s.

The characters all have very different accents, but as it is written and read in the first person and accents aren’t really relevant to the plot, there is no real indication as to the location of Blackheath, it could be the UK, it could be the USA, the only place I know it isn’t based in, is Paris, as that is the only place specifically mentioned in the book.

This lack of location actually only adds to the mystery which surrounds the story and the mystery of Blackheath.

The Devil and the Dark Water is due out 1st October 2020.

An impossible murder.
A remarkable detective duo.
A demon who may or may not exist.

Praise for The Seven Deaths of Evelyn Hardcastle:
‘Turton has astonishing ambition and narrative skill to match’ Daily Telegraph
‘Fiendishly clever’ The Times
‘Prepare to have your brain fried and your mind blown’ Daily Express

It’s 1634 and Samuel Pipps, the world’s greatest detective, is being transported from the Dutch East Indies to Amsterdam, where he is facing trial and execution for a crime he may, or may not, have committed. Traveling with him is his loyal bodyguard, Arent Hayes, who is determined to prove his friend innocent, while also on board are Sara Wessel, a noblewoman with a secret, and her husband, the governor-general of Batavia.

But no sooner is their ship out to sea than devilry begins to blight the voyage. A strange symbol appears on the sail. A dead leper stalks the decks. Livestock are slaughtered in the night.

Could a demon be responsible for their misfortunes?

With Pipps imprisoned, only Arent and Sara can solve a mystery that stretches back into their past and now threatens to sink the ship, killing everybody on board.