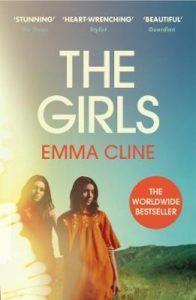 I first found out about this book when the author, Emma Cline was being interviewed on the Radio. She came across as very down to earth and relatable. Once I discovered that the book was loosely based on the true life events surrounding the Manson family, I knew I had to read ‘The Girls’. I have, like many others, had a morbid fascination with this subject for many years and find the psychology behind such heinous acts of violence to be intriguing. For a debut novel, it is a rather brave choice of subject matter, one which undoubtedly has a lot of back ground research readily available but which has been covered by so many fiction and non-fiction authors in the past, I’d be daunted by the task of competing. This, however, is where Emma Cline comes into her own, she does not compete, she goes for an altogether different approach.

The book as a whole and the story it tells is certainly a good one, a different perspective to any I’ve read or seen in the past, a complete view of the goings on but from the peripheral, from the perspective of a young girl drawn into the cult by the seduction of change and the attentions of a beautiful older girl.

This book is described as “A coming-of-age tale like no other…” by Grazia magazine and I have to admit, they’ve got something there. If I were to describe this book, that is exactly what I would say, but it is so much more than this, a coming-of-age and an acceptance-of-age is more accurate.  When we meet Evie she is well into adulthood, we don’t get told her exact age but as the book is supposed to be set in modern day California that would make Evie about 44 when she is telling the story. She is alone in a house and coming to terms with what has become of her life, what she has done, what she has achieved, what she has missed out on.

Emma Cline was born in the late 1980’s but this does not prevent her from painting a very believable picture of the summer of 1969. Perhaps the device of looking back is what makes it so easy to believe the setting of this book. The detailed descriptions in this book are limited to people and places, things that would still exist today or are a complete figment of Cline’s imagination. It allows for her to reference these places in a dream-like manner, memories being looked back upon rather than being experienced in real time. It is a great device for ensuring that the reader finds the plot and settings to be believable, and it certainly works here. Not once do I question how Cline knows what this place and time is like in spite of her young years.

At first, I struggled with some of the language, there were a couple of phrases early on which really threw me and tripped me up; this did rather surprise me as I am an avid reader with a very good grasp of the English language. After googling them (don’t judge me, we all turn to google sooner or later) I discovered that I was not the only person who struggled with a couple of the phases, perhaps these were local colloquialisms which are lost on anyone, not from North California.

Later on in the book, I found it hard to follow a couple of the passages, the switching between the present, in the moment and the past is blurred in some areas. I am usually a fan of this type of device in story telling but I did find there were some rather obvious mixings and muddling of the two timelines which made the story hard to follow. I feel like one of the first rules of story telling is not to confuse the reader, although perhaps I am being a little harsh as really all it did was to alienate me a little further at a point in the story where teenage angst and drama are going to be alienating to anyone not currently a teenager. We’ve all been through it but looking back on it is hard and painful for most of us, not something comfortable to do.

I really did find that a lot of the feelings and emotions which Cline focuses on in this book are familiar to me and I’m sure will be for many other readers. The idea of being attracted to someone of the same sex and struggling to overcome your own anxieties too, not only become friends but to increase your friendship with that person is a strong feeling felt by most of us at one time or another. Cline depicts these feelings in a very descriptive manner which really allows you to relate to the character of Evie.

Regardless of the fact that Evie is the center piece in this story, you can’t help but dislike her. At times she comes across a whiny and spoiled, she acts as if she is the injured party when really she makes her own luck and struggles to deal with the consequences of her decisions. Suzanne, another centerpiece is the ultimate anti hero; you find yourself drawn to her by the power of the images portrayed by Evie and yet you are aware from the beginning that there is something not quite right. She is sexual and sensual in ways that Evie has only dreamed of, but there is something deeper and darker. Cline writes her incredibly well, you find yourself missing her when Evie misses her and hating her when Evie does.

The Manson-like character is well written and it is through Evie’s descriptions that you see his flaws and humanity where others only see him as a deity to worship. It is Evie who sees through him and ensures that you, the reader, also see’s him as he really is.

If asked if I’d recommend this book, it would most definitely depend on who was asking. It is a brilliant book, well written with a great story, characters who are flawed and real but it’s really not a book for everyone. I believe that some people would struggle, not only with the subject matter but also with the intensity of the emotion experienced by the characters.

Emma Cline is from California. Her fiction has appeared in Tin House and the Paris Review. She was the recipient of the 2014 Paris Review Plimpton Prize for fiction and is a Granta Best Young American Novelist.

The bestselling debut that took 2016 by storm – a brilliant coming-of-age story with a dark heart: ‘This book will break your heart and blow your mind’ Lena Dunham

From the Inside page

California. The summer of 1969. In the dying days of a floundering counter-culture a young girl is unwittingly caught up in unthinkable violence, and a decision made at this moment, on the cusp of adulthood, will shape her life…”This book will break your heart and blow your mind.” (Lena Dunham). Evie Boyd is desperate to be noticed. In the summer of 1969, empty days stretch out under the California sun. The smell of honeysuckle thickens the air and the sidewalks radiate heat. Until she sees them. The snatch of cold laughter. Hair, long and uncombed. Dirty dresses skimming the tops of thighs. Cheap rings like a second set of knuckles. The girls. And at the center, Russell. Russell and the ranch, down a long dirt track and deep in the hills. Incense and clumsily strummed chords. Rumours of sex, frenzied gatherings, teen runaways. Was there a warning, a sign of things to come? Or is Evie already too enthralled by the girls to see that her life is about to be changed forever? –This text refers to the Audio CD edition.

“Stunning…thrilling… A spectacular achievement” (The Times)

“This book will break your heart and blow your mind” (Lena Dunham) – I’d agree with breaking your heart, it is an emotional, thought-provoking book which is highly relatable.

“The read of the summer” (India Knight Sunday Times)

“A tense and claustrophobic read” (Stylist) – most definitely. If you are not prepared for it then it can seriously take you by surprise, but I found the claustrophobic nature of this book to be part of its charm.

“An exhilarating read” (Emma Healey, author of Elizabeth is Missing) – perhaps because of the stuttering way in which I read this book, I’m not sure that exhilarating is quite how I’d describe it

“Darker than anything Gone Girl had to offer” (Shortlist) – now this I do not agree with. Gone Girl is a brilliant book with many twists and turns. Both books are dark in their nature but the subject matter differs drastically and the darkness of ’The Girls’ seems to reside in the knowledge that this is not pure fiction but is based on actual events which occurred.

“A seductive and arresting coming-of-age story…spellbinding” (New York Times Book Review) – seductive it most certainly is.

“An intensely atmospheric story that perfectly captures the aching loneliness and longing of a teenage girl.” (Sarra Manning Red) – so much so. It left me dismally reminiscing about my adolescence and the angst and sadness which goes hand in hand with growing up.

“One of the best novels I’ve read about female adolescence… And as with so many novels about cults, The Girls is set to inspire a cultish devotion all of its own” (Evening Standard) – by far one of the best I’ve read.

“Brimming with intelligence and ideas… Buy it for the Mansonesque plot but savour it for its insights” (Irish Times) – many a true word. This is exactly how I came across it and exactly how it became one of my favourite reads in a year or so.

Would certainly recommend. In fact, it is already being lent out and I have several friends waiting to read it. Somewhat slow-paced but perfect for a summers afternoon reading in the garden with a nice cup of tea and a digestive or two.