The Girl Who takes an Eye for an Eye 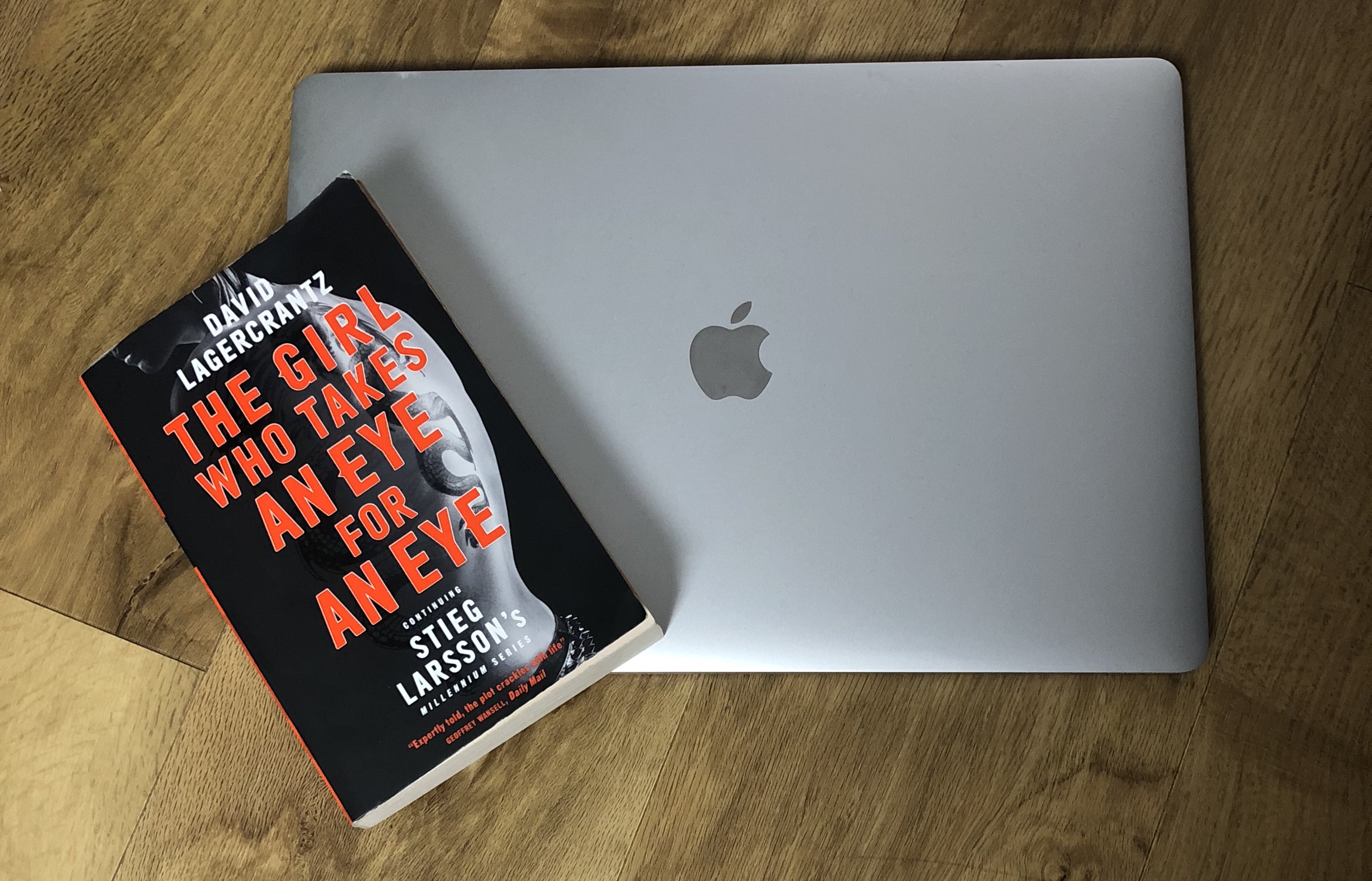 Stieg Larsson and The Girl with the Dragon Tattoo

The Girl with the Dragon Tattoo was one of those books which was recommended by everyone. So many of my friends said that they had read it and enjoyed it, that it was “my kind of book”.

Eventually, I gave in and picked up a copy at my local charity shop. This is my usual strategy for dealing with books and/or authors who, I feel, are too popular. I refused to buy any of Dan Brown’s books brand new, and don’t even get me started on James Patterson. I’m a little bit less self righteous now a days.

The first two chapters (from what I can remember – it was a few years ago now) were a bit of a hard slog, Larsson was most certainly one for detail and he clearly did an awful lot of research for each of his novels. I did actually learn from these two chapters, but the subject was mainly the financial market of Sweden and how technology companies made their money, so really a bit dry.

Once I got past these chapters though, the story began to unfold and grabbed me, I began to read it ferociously, even taking it in the bath with me (not something I’m keen to do with hardbacks – after so many years and so many ‘destroyed’ books and dust jackets). I fell in love with the characters and willed them to find their happy ending, or perhaps just some closure and peace after so many years of mystery and loss.

This trilogy is not for the faint-hearted. There are several very graphic scenes depicted within its pages. I have to admit, when I found out it was going to be made into a film, I was pleased, but also a little apprehensive over how the director would deal with this level of graphic physical and sexual violence whilst still keeping the integrity of the story. I was, thankfully, pleasantly surprised.

After book one, I wasn’t sure how the story would progress as there did seem to be a rather neat round-up at the end,  but I was keen to find out and purchased each of the other two books in the trilogy brand new as they were released. It was a relief to see that Larsson really was a master storyteller and was able to push his characters into new plots and new conspiracies with ease. 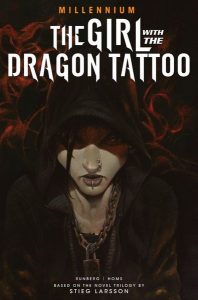 Check out the comic book version, available at Forbidden Planet.

One of the things which makes his stories so believable is the vast cast of characters who appear. Often in novels, the author will only write about and focus on characters with whom the main protagonist will come into contact. Larsson, however, knows that there are more than just the main characters in play in each of the scenarios and predicaments his characters get themselves into, he sees the far-reaching effects of the, often rash behaviour of his main characters, and he shows it to us. His ensemble cast is massive. For any of you who have read or even seen Game of Thrones, well he could easily have rivalled George R R Martin if he focussed on more than one the lands of Westeros and their ruling families.

When I first started reading this series of books, I got a little annoyed at his jumping between, seemingly unimportant, characters. but as time went on, and I learned of their importance to the story, I forgave him. It is this aspect which makes his often far-fetched stories come to life, seeing the scenarios from different characters, including the villains, makes each event a lot more tangible and real.

Steig Larsson died prior to the publication of the Millenium series and it with this knowledge that I read them, knowing that the third book would be the last. So in 2015, when I saw that there was a fourth book, I was a little surprised, to say the least.

The publishers and Larsson’s estate (controlled by his brother and father) decided that a fourth book was a good idea in order to continue the ‘adventures’ of Lisbeth, such a foreboding (all be it tiny in stature) female character, one who showed strength and a strong moral compass (you really do have to read more than just a few chapters to see what is meant by this).

The Girl who took an Eye for an Eye

I was rather keen to read this book, to learn more about Lisbeth’s history but I was still worried about what a new author would do with the characters. It was well recorded that Lagaercrantz had a bit of an issue with the way in which women would throw themselves at Bloomkvist without a seconds thought. He, therefore, tries to make Bloomkvist work a bit more for female attention. Other than that though, he has kept quite closely to Larsson’s style.

Parts of Lisbeth’s story was, of course, explored and explained, in the three books written by Larsson; Lagaercratz goes on to explore some of the incidents in more depth, adding more psychology to the character of Lisbeth.

It is a well-written story which doesn’t take away from the Millenium series. Instead, adding to the depth and personal history of several of the characters, filling them out to make them more than merely two-dimensional characters on the periphery of Millenium and the authorities investigations, and instead making them fully fledged characters in their own right.

There are some interesting themes explored in this book; religion, honour and family play a pivotal role in the story and its twists and turns. Lisbeth and her moral beliefs and complexities get her into all sorts of trouble, whilst dealing with her own demons, both real and imagined.

Synopsis of the previous books

**** BEWARE – if you have not read any of the “trilogy” then please note that these synopses may contain spoilers. ***

The Girl with the Dragon Tattoo – Steig Larsson

Forty years ago, Harriet Vanger disappeared from a family gathering on the island owned and inhabited by the powerful Vanger clan. Her body was never found, yet her uncle is convinced it was murder – and that the killer is a member of his own tightly knit but dysfunctional family.

He employs disgraced financial journalist Mikael Blomkvist and the tattooed, truculent computer hacker Lisbeth Salander to investigate. When the pair link Harriet’s disappearance to a number of grotesque murders from forty years ago, they begin to unravel a dark and appalling family history.

But the Vangers are a secretive clan, and Blomkvist and Salander are about to find out just how far they are prepared to go to protect themselves.

The Girl Who Played With Fire – Steig Larsson

Lisbeth Salander is a wanted woman. Two Millennium journalists about to expose the truth about sex trafficking in Sweden are murdered, and Salander’s prints are on the weapon. Her history of unpredictable and vengeful behaviour makes her an official danger to society – but no-one can find her.

Mikael Blomkvist, Millennium magazine’s legendary star reporter, does not believe the police. Using all his magazine staff and resources to prove Salander’s innocence, Blomkvist also uncovers her terrible past, spent in criminally corrupt institutions. Yet Salander is more avenging angel than helpless victim. She may be an expert at staying out of sight – but she has ways of tracking down her most elusive enemies.

The Girl Who Kicked the Hornets Nest – Steig Larsson

Salander is plotting her revenge – against the man who tried to kill her, and against the government institutions that very nearly destroyed her life. But it is not going to be a straightforward campaign. After taking a bullet to the head, Salander is under close supervision in Intensive Care, and is set to face trial for three murders and one attempted murder on her eventual release.

With the help of journalist Mikael Blomkvist and his researchers at Millennium magazine, Salander must not only prove her innocence, but identify and denounce the corrupt politicians that have allowed the vulnerable to become victims of abuse and violence. Once a victim herself, Salander is now ready to fight back.

The Girl in the Spider’s Web – David Lagercrantz

The sequel to The Girl with the Dragon Tattoo series has been shrouded in such secrecy that the novel was written on computers with no internet connection to avoid any leaks. Based on a plot outline Stieg Larsson wrote before his death, the novel was completed by David Lagercrantz and is finally here.

The uncompromising anti-hero Lisbeth Salander is again the chief protagonist, along with campaigning journalist Mikael Blomkvist, a lone wolf and champion of the truth. When a superhacker has gained access to top secret U.S. intelligence, Lisbeth is accused of acting without reason, but Blomkvist knows there must be something deeper at the heart of this – unveiling a tangled web of truth that someone is prepared to kill to protect.

THE GIRL WITH THE DRAGON TATTOO IS BACK WITH A UK NUMBER ONE BESTSELLER Lisbeth Salander and Mikael Blomkvist have not been in touch for some time. Then Blomkvist is contacted by renowned Swedish scientist Professor Balder. Warned that his life is in danger, but more concerned for his son’s well-being, Balder wants Millennium to publish his story – and it is a terrifying one. More interesting to Blomkvist than Balder’s world-leading advances in Artificial Intelligence, is his connection with a certain female superhacker. It seems that Salander, like Balder, is a target of ruthless cyber gangsters – and a violent criminal conspiracy that will very soon bring terror to the snowbound streets of Stockholm, to the Millennium team, and to Blomkvist and Salander themselves.

The Girl Who Takes an Eye for an Eye – David Lagercrantz

From the author of the #1 international best seller The Girl in the Spider’s Web comes the fifth book in the Millennium series, which began with Stieg Larsson’s The Girl with the Dragon Tattoo – the global publishing phenomenon that has sold more than 90 million copies worldwide.

Lisbeth Salander, the girl with the dragon tattoo, the brilliant hacker, the obstinate outsider, the volatile seeker of justice for herself and others—even she has never been able to uncover the most telling facts of her traumatic childhood, the secrets that might finally, fully explain her to herself.

Now, when she sees a chance to uncover them once and for all, she enlists the help of Mikael Blomkvist, the editor of the muckraking, investigative journal Millennium. And she will let nothing stop her—not the Islamists she enrages by rescuing a young woman from their brutality; not the prison gang leader who passes a death sentence on her; not the deadly reach of her long-lost twin sister, Camilla; and not the people who will do anything to keep buried knowledge of a sinister pseudoscientific experiment known only as The Registry.

Once again, Lisbeth Salander and Mikael Blomkvist, together, are the fierce heart of a thrilling full-tilt novel that takes on some of the most insidious problems facing the world at this very moment.