Oh My God What a Complete Aisling 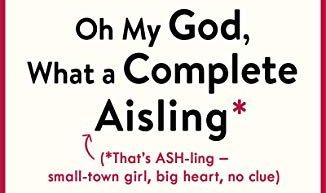 A novel by Emer Mclysaght and Sarah Breen

Oh My God What a Complete Aisling Blurb

Everyone knows an Aisling:

Loves going Out Out, but secretly scared of liquid eyeliner.
Happy to drink the bar dry, but will bring her own coaster if necessary.
Would rather die than miss a cooked hotel breakfast, but can calculate the Points in a Snickers at fifty paces.

Aisling’s the girl with a heart of gold, but a boyfriend who still hasn’t made a peep about their Big Day even after seven years.

But then a disastrous romantic getaway shows Aisling that it’s time to stop waiting around and leave John behind for the bright lights of Dublin. After she’s wailed her way through Adele’s Greatest Hits, that is.

Between glamorous new flatmates, a scandal at work and finding herself in a weird love square, Aisling is ready to take on the big city. So long as she has her umbrella with her.

How I came by Oh My God What a Complete Aisling

A couple of weeks ago, one of my colleagues was talking about this book at work and it had me intrigued. A couple of her friends back home in Ireland ‘sold’ it to her as “Oh my god, this book is so you!”

After a bit of debate about where to purchase a book (she’s apparently not a reader by nature) I purchased a copy of the book for her.

As someone who is not a reader, she expected to take months to get through this book, however, she managed it in just over a week. Which I think is a testament to how well written and easy to read this book is.

The typeface is pretty large in this book and the chapters reasonably short. Not ‘Patterson’ short but short all the same. Approximately 4 pages each. This helps with the speed at which you read and I think ultimately adds to the ease of reading and keeping the pace up without it seeming like you are being rushed through the story.

My colleague was convinced that not being Irish, I’d need a translator to get through Oh My God What a Complete Aisling, she even offered to translate for me as I went along. I was surprised how little I did need translating, to be honest, although there were some definite Irishism’s which I needed explaining. See below my helpful guide.

West Coast Cooler – a wine cooler made from white (or Rose) and fruit flavouring, drunk copiously in this book (this may not be a strictly Irish drink, but I still had to ask). A West Coast Cooler and a pint of ice cubes being Aisling’s drink.

Shnake – a person who is just like a snake, a sly person, two-faced

Absolute gas – a person who is really funny

Eejit – an idiot or a fool, but more often it’s used in an affectionate (yet still mocking!) manner.

To be honest I had more trouble reading the names of some of the characters than understanding the context of the writing. It’s like the Hermione situation all over again. I mean, everyone knows how to pronounce Siobhan right? (ShiVawn) but how do you pronounce Sadhbh? I still don’t know. My friend says Sive Em (like five with an S). I was always terrible at spoken languages at school, the pronunciation of words was always my downfall, still is.

Authors Sarah Been and Emer Mcslaught

Born in a small town named Borris and now living in Dublin with her family, Sarah seems to write what she knows. This book is about a country girl who works in Dublin and commutes daily for work. She started working as a journalist and in 2017 she went on to write this book with her long term friend.

Also born and raised in Borris, Emer has worked extensively in journalism and radio and has previously been an editor of the Daily Edge.  She also lives in Dublin, with her three cats.

In 2017 they released this book and it instantly became a best seller.

“I think that most of the success of this book is that it rings true with a lot of girls. Girls a certain age who come from small towns and work in the ‘big smoke’. Not necessarily just from Ireland either.”

Emer is right of course. This book doesn’t just appeal to Irish girls, but any girl who knows what small-town life is like. The fact that everyone knows everyone’s business, the variety of people you meet but also the stagnancy and boredom that can go hand in hand with small-town living.

Oh My God What a Complete Aisling Review

I actually loved this book. Ais has a naive innocence which gives the story a depth and really makes you feel for her when things don’t quite go to plan. She’s such a generous character who you warm to instantly, which makes all the ups and downs that much more emotional.

The reader follows her on the rollercoaster year of her life which sees her move to Dublin, break up with her long-time boyfriend and suffer family drama. Her journey may not seem that big to some, but for a small-town girl, it is one of self-discovery, excitement, tragedy, and happiness. A real-life story and one which we can all relate to on some level.

Emer and Sarah do a great job of writing Aisling and you can tell that they draw on their wealth of experience of being very similar to Aisling and the things she goes through.

Disclaimer: This review has been sat in my draft folder for over six weeks now. Review of book number two will be up shortly.