Love Me Not – by M J Arlidge 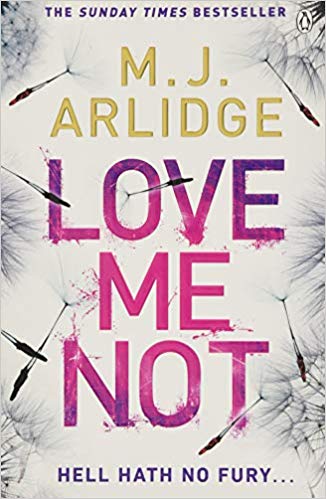 Love Me Not – A Helen Grace Novel 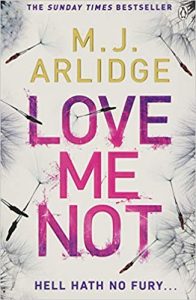 Blurb for Love Me Not

A blood-red sunrise
Just after 7 AM DI Helen Grace stumbles on a dead woman lying in a country road. She has been brutally shot for no apparent reason.

Two hours later
At gunpoint, a shopkeeper is forced to close up by two assailants. Before the police can get inside a single gunshot rings out.

A rampage of revenge?
Over one long day, the town of Southampton is terrorized by two young killers who appear to be killing at random.

For DI Helen Grace, it’s a race against time. Uncover why they’re doing this and who’s next or always be a step behind – until the sun sets on this bloody killing spree.

Love me Not story

Love Me Not is a classic police chase story. It is a format well used and loved by American authors and TV producers. Find a couple of damaged individuals, think Bonnie and Clyde or Fred and Rose West, add in a damaged police detective or two, furnish them with an arsenal of weapons, wind up and set them on a rampage across a city.

The victims of these two are all, with the exception of a few innocent bystanders, antagonists of the two “anti-heroes” of this story.

Love Me Not follows them across the city whilst they wreak havoc, scare the public and avoid police capture, all in the name of revenge. All whilst being hunted down by Helen Grace, a police detective who has just come back from a period of leave (explained in a previous book) and who is struggling not only to adjust being back on the job but also to decide who she can trust as she pursues these two mercilessly across the city.

Oh and don’t forget the pushy reporter, in this case, Emilia, who is constantly on Helen or the killer’s tail and who, of course, manages to get herself right in the middle of the action and caught up in trouble from very early on.

Review of Love Me Not

I did not enjoy this book as much as I’d have liked. The story I found very hard to believe, mainly because I am not used to gun violence in the UK. This is gradually changing, but to me, I don’t associate guns with British crime.

I am always on the lookout for a British crime writer who manages to set a novel in Britain and make me believe it truly happened. I am one of those from the generation who grew up on American crime drama on TV, and as such, it takes a very high standard to sway my opinion. That being said, there are a few, Luther, in particular, I feel is incredibly well written, produced and acted. Neil Cross is still not, however, an author whose work I have read much of. Sadly there are not many other British authors who appeal to me in the same way that American authors do. Perhaps it is the fact that I have no experience in America, so really most storylines will fly with me, the more outlandish the better. But the British police force is not used to dealing with skin-stripping serial killers or gun rampages in quite the same way. So when a British author attempts it, it has to be good and believable.

This book didn’t tick all the boxes for me. It was fast-paced, but I feel as though the use of guns in this story didn’t ring true to me and made the whole thing feel a bit forced.

This is book 7 in the series, and although I read it as a stand-alone novel, certainly something which you can do with this book, I wonder if reading a few earlier novels would have warmed me to the characters and therefore the storyline. I think that Helen Grace has the potential to be a great character with deep personality flaws, personal issues, and an unshakeable determination to catch the bad guy. But some back story is needed. Therefore, if you are going to read this book, perhaps start with the other six first, or at least one or two of them to set the scene.

I think I’ll give this one another go once I’ve caught up on a little backstory.

Arlidge is a good writer. He has amassed a total of 7 novels in less than 3 years. a feat that only the likes of Patterson appear to be able to succeed at for any length of time. And once you open one of his novels, you can see that the resemblance does not cease there. His chapters are short, Patterson short. His stories are fast-paced and full of strong, well-defined characters, all of whom have a detailed and dramatic backstory.

Looking at his career he is perfectly set for writing this type of novel. A screenwriter by trade, he spends his days writing stories and screenplays for TV. Therefore, it is not a surprise that he can churn out his novels in such a short space of time.

I can’t help but feel that M J Arlidge is one of the authors who sparked me to write the article ‘Female authors are taking over – or are they? A male author writing a story that features some very strong female characters and who feels the need to initialise his name.

In recent months, the numerous incidences of sexism and chauvinism in many industries have had a very harsh spotlight shone upon it, rightly so. But I guess I would just like to live in an equal society. This article in the guardian “Meet the male writers who hide their gender to attract female readers” made me angry! Why should anyone have to hide their gender, race, sexual preference, or in fact any other aspect of what makes them who they are, in order to attract readers? And yet, publishing houses across the world are still insisting that both men and women alike amend certain aspects of who they are in order to attract the required amount of readers to their work. Why is this? Because, we as humans are all capable of such discrimination and until such time as we discard these psychological barriers, we will never live in a fair and just world.

TV Series – but it’s not Love me Not

Since writing this original article, a TV series by MJ Arlidge has been released on ITV. 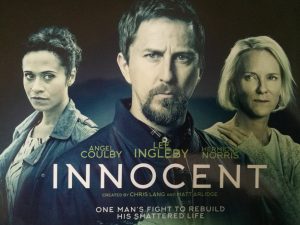 Innocent is a completely stand-alone story written for the TV series and not an adaptation of Arlidge’s books.

“A story of love, lust, jealousy and betrayal, of one man’s fight to rebuild his shattered life and a family’s struggle to find the truth behind their loved one’s murder. After seven years in a high-security prison, David Collins’ (Lee Ingleby) conviction for the murder of his wife, Tara, is overturned due to a technicality, or as his lawyer puts it an appalling miscarriage of justice. Able to start his life again and begin to repair relationships with his family and friends, David hopes to finally be allowed to mourn his wife’s death. As a new investigation is launched, headed by DI Cathy Hudson (Angel Coulby), dark secrets of abuse, affairs and money troubles rise to the surface. From jealous sisters to disgruntled lovers, these secrets rip fragile relationships apart at the seams. But one question remains: is David Collins truly innocent?”

Perhaps this short series would be a better gateway for me to access M J Arlidge’s work. I’ll let you know if I can find it on any of the streaming services.